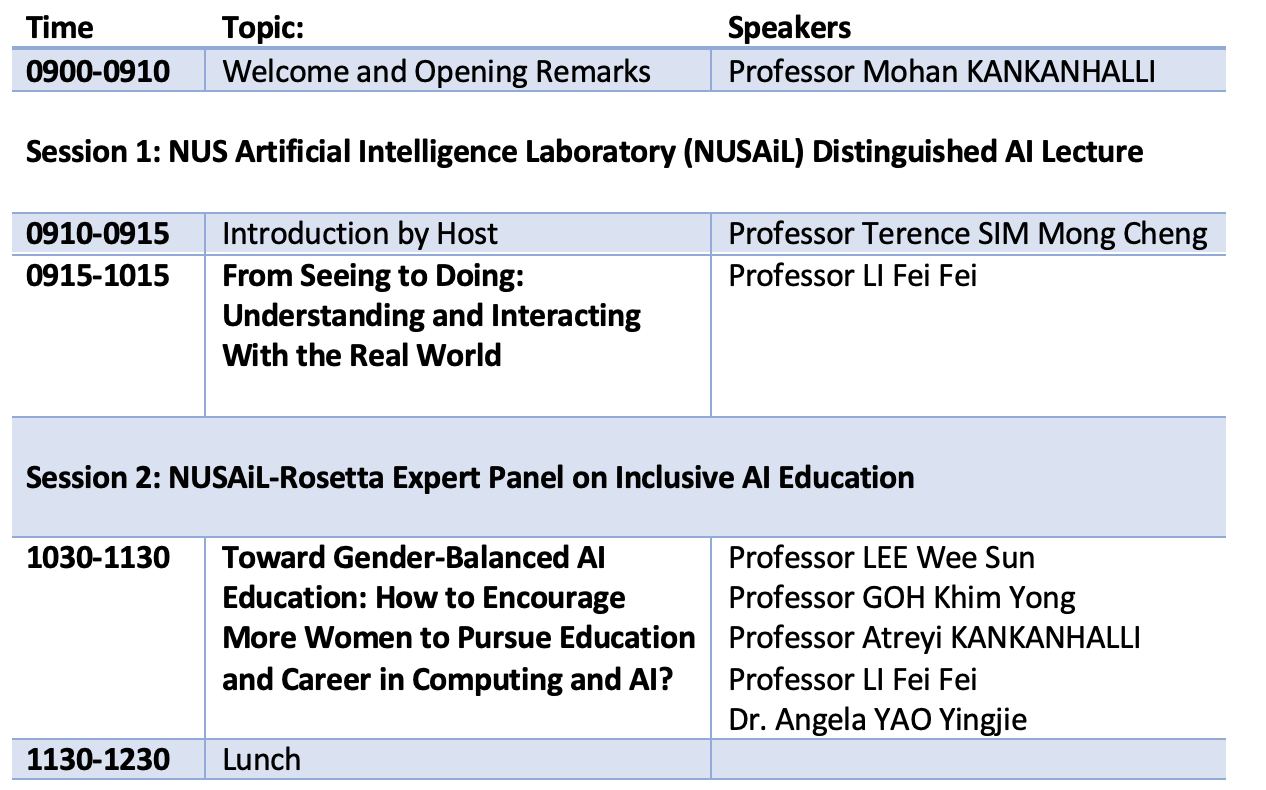 Join NUS Computing Dean Mohan Kankanhalli, as well as other faculty members, in this hybrid symposium on the future of Artificial Intelligence.

2) For online attendance the webinar/meeting link will be provided upon registration confirmation. Registration Link: https://forms.office.com/r/ydUfs50BmT

Registration closes on 12 July 2022 (Tuesday) at 12:00 noon Singapore time.
Please note that the seating capacity of the venue is limited; in the event that the symposium is oversubscribed, we may offer online attendance to registered participants.

Title: From Seeing to Doing: Understanding and Interacting With the Real World

Dr. Fei-Fei Li (https://profiles.stanford.edu/fei-fei-li) is the inaugural Sequoia Professor in the Computer Science Department at Stanford University, and Co-Director of Stanford’s Human-Centered AI Institute. She served as the Director of Stanford’s AI Lab from 2013 to 2018. And during her sabbatical from Stanford from January 2017 to September 2018, she was Vice President at Google and served as Chief Scientist of AI/ML at Google Cloud. Dr. Fei-Fei Li obtained her B.A. degree in physics from Princeton in 1999 with High Honors and her Ph.D. degree in electrical engineering from the California Institute of Technology (Caltech) in 2005. She joined Stanford in 2009 as an assistant professor. Prior to that, she was on faculty at Princeton University (2007-2009) and the University of Illinois Urbana-Champaign (2005-2006).

Dr. Fei-Fei Li’s current research interests include cognitively inspired AI, machine learning, deep learning, computer vision, and AI+healthcare, especially ambient intelligent systems for healthcare delivery. In the past, she has also worked on cognitive and computational neuroscience. Dr. Li has published more than 200 scientific articles in top-tier journals and conferences, including Nature, PNAS, Journal of Neuroscience, CVPR, ICCV, NIPS, ECCV, ICRA, IROS, RSS, IJCV, IEEE-PAMI, New England Journal of Medicine, Nature Digital Medicine, etc. Dr. Li is the inventor of ImageNet and the ImageNet Challenge, a critical large-scale dataset and benchmarking effort that has contributed to the latest developments in deep learning and AI. In addition to her technical contributions, she is a national leading voice for advocating diversity in STEM and AI. She is co-founder and chairperson of the national non-profit AI4ALL aimed at increasing inclusion and diversity in AI education.

Dr. Li is an elected Member of the National Academy of Engineering (NAE), the National Academy of Medicine (NAM), and the American Academy of Arts and Sciences (AAAS). She is also a Fellow of ACM, a member of the Council on Foreign Relations (CFR), a recipient of the 2019 IEEE PAMI Longuet-Higgins Prize, 2019 National Geographic Society Further Award, 2017 Athena Award for Academic Leadership, IAPR 2016 J.K. Aggarwal Prize, the 2016 IEEE PAMI Mark Everingham Award, the 2016 Nvidia Pioneer in AI Award, 2014 IBM Faculty Fellow Award, 2011 Alfred Sloan Faculty Award, 2012 Yahoo Labs FREP award, 2009 NSF CAREER award, the 2006 Microsoft Research New Faculty Fellowship, among others. Dr. Li is a keynote speaker at many academic or influential conferences, including the World Economic Forum (Davos), the Grace Hopper Conference 2017, and the TED2015 main conference. Work from Dr. Li’s lab has been featured in a variety of magazines and newspapers, including New York Times, Wall Street Journal, Fortune Magazine, Science, Wired Magazine, MIT Technology Review, Financial Times, and more. She was selected as a 2017 Women in Tech by the ELLE Magazine, a 2017 Awesome Women Award by Good Housekeeping, a Global Thinker of 2015 by Foreign Policy, and one of the Great Immigrants: The Pride of America in 2016 by the Carnegie Foundation, past winners include Albert Einstein, Yoyo Ma, and Sergey Brin, et al.

Abstract:
Visual intelligence is a cornerstone of intelligence, for both humans and machines. In this talk, I go over a number of research work by our group on the topics of visual perception and robotic learning. The guiding principle of our work is inspired by the Gibsonian belief that perceptual and robotic learning should be based on an ecology approach, solving tasks and problems approximating the real-world setting and scale.

Toward Gender-Balanced AI Education: How to Encourage More Women to Pursue Education and Career in Computing and AI?

AI is a new power engine that will help build better lives. New challenges and opportunities in AI empower the solutions to many social, economic, and environmental challenges in the post-pandemic world. The future of AI will be shaped by the next generation of AI scientists, engineers, practitioners, and users. Over the decades, the gender imbalance in the AI research, education, and professional communities has persisted and shown dangerous signs of deterioration. How do we foster gender-balance AI education to face the opportunities and challenges ahead? How do we best teach AI in universities and lifelong education programs going forward?

The topics of interest include, but not limited to:

NUSAiL:
Hosted at NUS Computing, the NUS Artificial Intelligence Laboratory’s (NUSAIL) mission is to be a centre of excellence in AI research, education, and practice, focusing on the three pillars of human-centred AI technology: embodied AI, interactive AI, and trustworthy AI. Its members include faculty, staff, and students from NUS Computing, as well as affiliated members from other faculties and organisations, both locally and internationally.
Visit https://ai.nus.edu.sg/ for more info.

Rosetta:
Rosetta is a special interest group in AI Education led by faculty in NUS Computing. It brings together faculty members in NUS who teach AI courses in a spirit of dialogue and collaboration to leverage each other’s strengths and support each other in the field of AI education.

This symposium is supported by AI Singapore (https://aisingapore.org/).